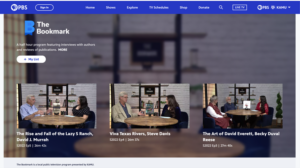 Texas A&M University Press is the only university press in the United States that has its own dedicated television show. The Bookmark, broadcast from KAMU, Texas A&M University’s PBS affiliate, reaches a wide audience across Texas (22 counties and counting) and has become one of KAMU’s most popular shows.

What is the driving force behind the success of this show (other than the books we publish, of course)? That would be our intrepid publicity and advertising manager, Christine Brown. Christine took an initial concept of a show about authors and developed it, executive-producing the program from its beginning episode. Here, in her own words, is more about the beginning of The Bookmark, its evolution, and just what viewers and authors think about it! 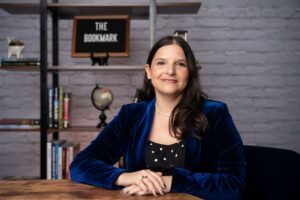 How did The Bookmark come to be?

The Bookmark grew out of a partnership with Texas A&M University Press and the educational broadcasting department. At the time we started, both departments were under the same academic umbrella. At an all department meeting, I was approached by someone at the television station who asked me if I’d ever thought about using television to promote our books. Which, of course, I had, but not in the way he was asking. We set up a meeting, I toured the studio, and we came up with a plan for a television show where I interview authors of Texas A&M University Press and the Texas Book Consortium.

I had no broadcasting or interviewing experience, so my initial idea was to set up the show in a way that I felt comfortable (and capable of) doing. We decided on a long form, 30 minute interview show that was conversational and at a table. While I wasn’t a broadcaster, I do have a degree in English, so reading a book and discussing it was certainly something I was comfortable with. It all happened quickly, and we were filming our first episode about a month after that initial meeting.

How long has the show been on the air?

We took a break over the pandemic and didn’t film new episodes for just over two years. We’re back now, and they are still committed to the show. They’ve redesigned my set, and we’re in discussions on how to start filming on locations and adding some new segments to the show. As of today, we’ve filmed almost 90 episodes. I’m looking forward to getting creative and making some more dynamic episodes where we can bring some of these books to life for our audience.

What has been the overall reaction to the show?

The benefits that we’ve seen with the show have been varied. While it’s impossible to pin down how many books have been sold because of the show, we do get people coming in to buy the book they saw on TV. The Bookmark also gives the Press great visibility, both on campus and in the community. And finally, it’s a great author relations tool. I’ll have just about any author willing to make the trip to College Station, and it may be the only opportunity some of these authors have to do a TV interview. I can’t get them on Oprah, but I can interview them myself! Authors also find these interviews useful, since all episodes go online. They can share the link on their social media to promote their book, but also use it to demonstrate that they can be good speaker at conferences or events and gives them some video to put on a sizzle reel.

What would you share with other presses who are looking to start a new media program?

I would say to start on your campus and see what resources already exist that you might be able to tap into. When we started The Bookmark, I didn’t have to worry about any of the technical aspects of filming, editing, or distributing the show. I just had to come up with the content and left the rest up to the professionals. Look into what kind of public media (both radio and television) is in your area and see if they are open to partnering with your press. I think one of the reasons our show has been so successful is that’s it’s mutually beneficial to both parties.

FOR MORE INFORMATION ABOUT THE BOOKMARK

Click here to find out more about UP Week and how Texas A&M University Press is marking the occasion.