This collection is compiled from the unpublished poems of Karl Shapiro at the University of Texas in Austin and elsewhere. They are largely as Shapiro left them, in a desk drawer in his apartment in uptown Manhattan.
...
"Proposition"
When we’re old lovers, sitting in separate chairs
Silently, will you think our love has faded
Though we smile richly and are still unaided
By doctors, accountants and presumptuous heirs?
Though talk has frozen in geologic layers
Of long alignment of the loved and hated
And even our sexuality is jaded
And we have settled all our private cares

Including death, listen to me, adored,
Words cannot fail us ever, no matter how
The fates brighten their implements to prove
That even gods and geniuses get bored
With marriage, fucking and poetic love,
Because, beloved, we call each other thou.

KARL SHAPIRO was one of the twentieth-century’s major poets. He published more than twenty books of poetry, two autobiographies, including poetry, seven collections of essays, and a novel. Consultant in Poetry at the Library of Congress (the position now known as the U.S. Poet Laureate), he was the winner of numerous prizes and awards, including the Contemporary Poetry prize, two Guggenheim Foundation fellowships, the Pulitzer Prize in poetry, the Shelley Memorial Prize, and the Bollingen Prize. He was also a member of the Academy of Arts and Letters and a faculty member at several universities. Active in his craft well into his late seventies, in 2000 Shapiro died at the age of 86.

ROBERT PHILLIPS, who is responsible for compiling, editing, and introducing this final book of poems by Karl Shapiro, was the author or editor of some thirty volumes of poetry, fiction, criticism, and belles lettres and publishes in numerous journals. A professor of English, he was director of the prestigious Creative Writing Program at the University of Houston from 1991 to 1996. In 1998 he was named a John and Rebecca Moore Scholar at the university. 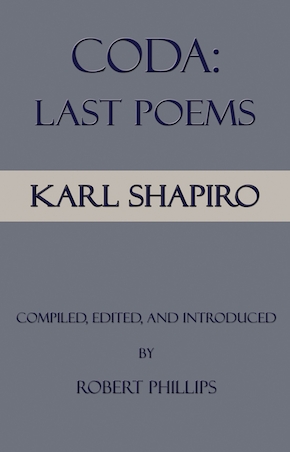