Ne’er-do-well immigration attorney Harrison Bent can’t imagine why the wealthy and mysterious Maggie Leudecke wants him to solve her eminent domain problem.  If he didn’t have an angry wife to placate, an inscrutable stalker to identify, an obsessed girlfriend to escape, and a murder to solve, a successful outcome to the Leudecke case might revive his career, pay for his autistic son’s special school, and—most important of all—help convince his young paralegal, Chloe, that the afternoon she spent with him in a cheap motel wasn’t an error in judgment, but the beginning of something profound.  If only he had some clue as to what he was doing . . . .


From the book: I know myself. That’s the good news. That’s also the bad news. For example, I knew I was not equipped to deal with the Leudecke case. I also knew I wouldn’t turn it down or hand it off to somebody better suited. But, seriously, what background did I have in eminent domain?  Or with Mexican drug dealers?  Or dead Mexican drug dealers?  None. And I knew it.

CLIFF HUDDER earned an MFA in Fiction Writing from the University of Houston. His work has received the Barthelme and Michener Awards, the Peden Prize, and the Short Story Award from the Texas Institute of Letters.  His novella, Splinterville, won the 2007 Texas Review Fiction Award.  He teaches English at Lone Star College-Montgomery and lives in Conroe, Texas.

“In Cliff Hudder’s thoroughly captivating first novel, an immigration attorney, Bent, haunted by signature fainting spells, moves through a rich, border landscape of Texas populated by witches, mobsters, anyone who thinks they can finagle law into profit, and the misfits of Café Rico. But he also faces personal borders—drug addiction, adultery, and a hard-nosed therapist who says of his infidelities, ‘If you want companionship…society is saying buy a fucking pet.’ Though Hudder’s protagonist is happily anything but hardboiled, his prose is: precise, unflinchingly honest, heartbreakingly beautiful. His gorgeous, noirish landscape of contemporary Texas is sure to thrill.”
—Wendell Mayo, author of The Cucumber King of Kedainiai

“One of the most compulsively readable, surprising books I’ve seen in years. Hudder has created an everyman in Harrison Bent: among the most memorable, neurotic, and likably unlikable narrators in recent history. Each scene of Pretty Enough for You throbs with the love Bent has for his autistic son, Henry, who lives in Bent’s heart as he will remain in yours long after you’ve finished this marvelously funny, intricately plotted, and brave novel.”
—David Samuel Levinson, author of Antonia Lively Breaks the Silence

“Cliff Hudder’s Pretty Enough for You is a guy’s book, meaning its emphasis is on men and their concerns: work and sex. The narrator could be a Richard Russo character: an anti-hero aware of his faults but unaware of his innate goodness. Part of his ‘assholery’ is his treatment of women, but he doesn’t treat men, especially himself, any better. Read this for his bad-luck shenanigans, but most of all for his pitch-perfect, self-deprecating humor.”
—Nan Cuba, author of Body and Bread

“With Pretty Enough for You, Cliff Hudder plumbs our capacity for yearning and tenderness, yet somehow makes it all exceedingly funny and charming. Harrison Bent is bent—perhaps even a bit twisted—but his story is that rare sort that makes us hungrier for it with every page we consume. This is a marvelous novel by a writer of the highest, most compassionate order.”
—Bruce Machart, author of The Wake of Forgiveness 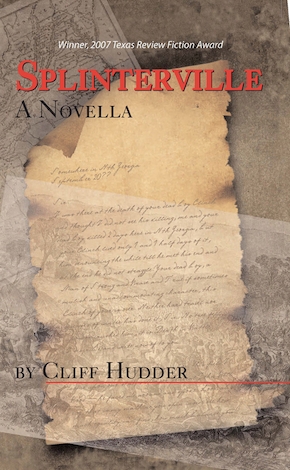