Claiming Citizenship spotlights a community where Mexican Americans, regardless of social class, embraced a common ideology and worked for access to the full rights of citizenship without confrontation or radicalization. Victoria, Texas, is a small city with a sizable Mexican-descent population dating to the period before the U.S. annexation of the state. There, a complex and nuanced story of ethnic politics unfolded in the middle of the twentieth century.

Focusing on grassroots, author Anthony Quiroz shows how the experience of the Mexican American citizens of Victoria, who worked within the system, challenges common assumptions about the power of class to inform ideology and demonstrates that embracing ethnic identity does not always mean rejecting Americanism. Quiroz identifies Victoria as a community in which Mexican Americans did not engage in overt resistance, labor organization, demonstrations, or the rejection of capitalism, democracy, or Anglo culture and society.

Victoria's Mexican Americans struggled for equal citizenship as the "loyal opposition," opposing exclusionary practices while embracing many of the values and practices of the dominant society.

Various individuals and groups worked, beginning in the 1940s, to bring about integrated schools, better political representation, and a professional class of Mexican Americans whose respectability would help advance the cause of Mexican equality. Their quest for public legitimacy was undertaken within a framework of a bicultural identity

that was adaptable to the private, Mexican world of home, church, neighborhood, and family, as well as to the public world of school, work, and politics. Coexistence with Anglo American society and sharing the American dream constituted the desired ideal.

Quiroz's study makes a major contribution to our understanding of the Mexican American experience by focusing on groups who chose a more subtle, less confrontational path toward equality. Perhaps, indeed, he describes the more common experience of this ethnic population in twentieth-century America.

ANTHONY QUIROZ, an assistant professor of history at Texas A&M University–Corpus Christi, received his Ph.D. from the University of Iowa. A former resident of Victoria, Texas, he has written several articles about the role of Mexican Americans in that city's history. This is his first book.

“Anthony Quiroz’s book is a milestone in Mexican American historiography.”—Journal of American History

"Anthony Quiroz's book is a milestone in Mexican American historiography."--Journal of American History 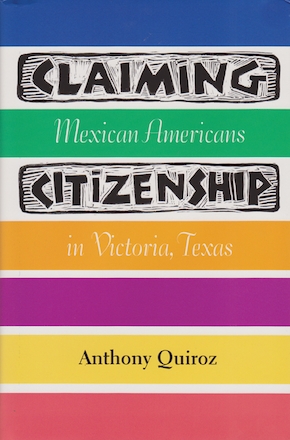