Chronicling the most ambitious airlift in history . . .

Carried out over arguably the world’s most rugged terrain, in its most inhospitable weather system, and under the constant threat of enemy attack, the trans-Himalayan airlift of World War II delivered nearly 740,000 tons of cargo to China, making it possible for Chinese forces to wage war against Japan. This operation dwarfed the supply delivery by land over the Burma and Ledo Roads and represented the fullest expression of the U.S. government’s commitment to China.

In this groundbreaking work—the first concentrated historical study of the world’s first sustained combat airlift operation—John D. Plating argues that the Hump airlift was initially undertaken to serve as a display of American support for its Chinese ally, which had been at war with Japan since 1937. However, by 1944, with the airlift’s capability gaining momentum, American strategists shifted the purpose of air operations to focus on supplying American forces in China in preparation for the U.S.’s final assault on Japan. From the standpoint of war materiel, the airlift was the precondition that made possible all other allied military action in the China-Burma-India theater, where Allied troops were most commonly inserted, supplied, and extracted by air.

Drawing on extensive research that includes Chinese and Japanese archives, Plating tells a spellbinding story in a context that relates it to the larger movements of the war and reveals its significance in terms of the development of military air power. The Hump demonstrates the operation’s far-reaching legacy as it became the example and prototype of the Berlin Airlift, the first air battle of the Cold War. The Hump operation also bore significantly on the initial moves of the Chinese Civil War, when Air Transport Command aircraft moved entire armies of Nationalist troops hundreds of miles in mere days in order to prevent Communist forces from being the ones to accept the Japanese surrender.

JOHN D. PLATING, a colonel in the U.S. Air Force, teaches history at the Air Force Academy in Colorado Springs, Colorado. A transport pilot with combat experience, he is the author of a number of articles that have been published in Air Power History, Air Force Journal of Logistics, and elsewhere.

"This scholarly study, reflecting the author's wide research on the subject at all levels, including the strategic, convincingly demonstrates how the original "Hump" operation expanded from a show of American political support for China to a major supply effort for American forces in China for B-29 operations against Japan and preparations for a final assault on the Japanese mainland. Plating's work represents an original contribution to the literature that is certain to become the definitive work on the subject."—Bill Bartsch, author, Every Day a Nightmare: American Pursuit Pilots in the Defense of Java, 1941-1942

"John Plating's The Hump is an intelligent, groundbreaking work that is sure to become essential reading for those interested in the history of China and the Second World War."—Robert von Maier, editor-in-chief, Global War Studies

"Author John D. Plating, an air force officer and former transport pilot, has written not only a first-rate history, but the first truly comprehensive examination of the 1942-45 efforts to maintain an aerial supply channel to China. . . Plating's richly researched and rewarding pages do not neglect the experiences of the flight crews,. . . He displays a mastery of the many-layered agendas of British, American, and Chinese actors in the drama." — Richard Frank, World War II
"The Hump was an enjoyable read, and Plating has produced the best single-volume study of the Hump airlift available."--Jeffery S. Underwood, Military History of the West 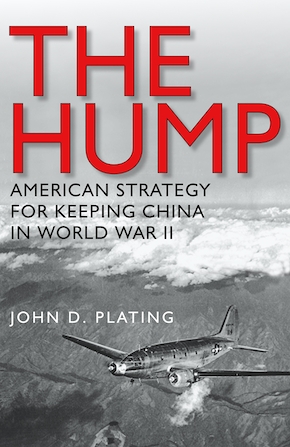