"When America declared war in 1917, I was a few months past eighteen years of age and just finishing my first year in college. By the time I was to reenter in the fall for the second year, war activities were [under way] on a large scale. Men were going into some branch of the service on all sides. I felt that my family should do their bit in uniform, and my age designated me as the most appropriate one." This Texas A&M College student was Carl Andrew Brannen; these are his memoirs of a time when boys became men and your country became your life.

Over There: A Marine in the Great War takes the reader on an almost two-year journey through his world as a young soldier in the war. Based on Brannen's memoirs recorded in the 1930s and photographs he took with a German camera as a soldier, this book describes day-to-day obstacles he and his fellow soldiers faced during Marine Corps training, movement to France, and mortal combat.

"As I jumped for protection into a ditch nearby, a fusillade of bullets caught me below the heart on the left side, through one lens of the field glasses, and against my bandoleer of ammunition. The best I remember, ten bullets in my own belt exploded, but they had deflected the enemy bullets, saving my life."

Brannen, though wounded in battle and in the hospital for three weeks, went on with 80th Company through the Meuse-Argonne campaign to the armistice on November 11. He pulled his months of

duty in the occupation of the Rhineland and, at its end, earned a place in the Composite Regiment of men selected to represent the American Expeditionary Forces in the many ceremonial events of 1919.

Complemented with a unique set of photographs by the author's son that retrace his father's military campaigns, Over There is a highly personal account, presented from an enlisted man's perspective of the battle fronts of Belleau Woods in the Château-Thierry sector, Soissons, Pont-a-Mousson, St. Mihiel, Blanc Mont Ridge, and the Meuse-Argonne battle.

As a first hand commentary and a social document of life in the trenches during World War I, it is a useful contribution to military history. Brannen's personal accounts will touch and fascinate all those interested in World War I.

The late Col. Rolfe L. Hillman, a military historian, served in the U.S. Army from 1945 to 1972Peter F. Owen, an active duty Captain in the Marine Corps, has written an article on the 79th Company of Marines in June, 1918. He is currently working on a single volume of history of the 4th Marine Brigade in the Great WarJ. P. Brannen, the author's son, has written numerous articles in mathematical sciences and has been a guest scientist in Switzerland. A SIAM national lecturer, he currently lives in New Mexico. 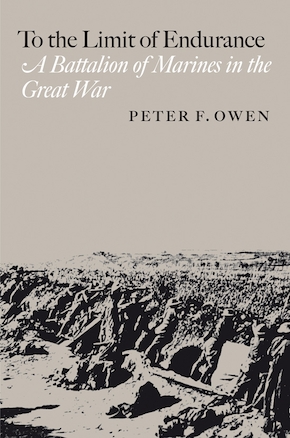