This book traces the evolution of the Browning Automatic Rifle from the Model of 1918, first to face combat in World War I, through its various configurations in all arenas of combat all the way to the present-day1918 A3 SLR developed and manufactured by Ohio Ordnance Works.

The Browning Automatic Rifle, known simply as the BAR, was a shoulder-fired light machine gun fed by a twenty-round box magazine of 30-06, the same ammunition used by the 1903 Springfield. Weighing in at under twenty pounds, it could easily be carried by one soldier, who could drape a bandolier with twelve magazines over his shoulder, giving him a total of 260 rounds (counting those in the mounted magazine). Generally accompanied by at least one companion carrying an additional bandolier with twelve magazines, the BAR man could exercise some serious firepower. Used sparingly during World War I because of the United States’ late entry into the war, it played a major role during World War II and the Korean Conflict, offering a very reliable combination of rapid fire and penetration. Few weapons of war ever pressed into service have offered the romantic allure of the BAR.

Ohio Ordnance Works, Inc. manufactures a semi-automatic version of this rifle, the 1918 A3, keeping alive this icon of American military weaponry. The only one of its kind in production anywhere in the world, it is manufactured with some of the original USGI WWI and WWII parts. Only the highest quality Ohio Ordnance original and USGI standard parts are used in its production. The heart of the 1918 A3 is the receiver made from 8620 steel casting that has been carburized and induction heat treated. The castings are machined on state-of-the-art CNC machining centers. Every rifle is fully assembled, inspected, test-fired, and re-inspected under the direct supervision of a master armorer.

BOB CONROY has worked in the firearms industry for over fifteen years as an employee of Ohio Ordnance Works, Inc., where as vice president he handles sales, marketing, and business development. 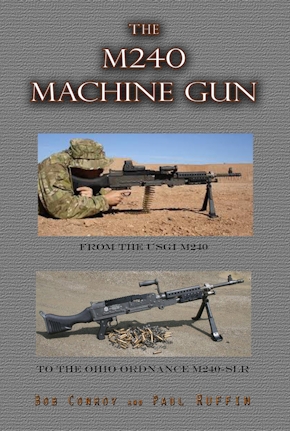