The Lazy S Ranch, one of the last major ranches to be established in Texas, came into being at a time when most of the other great ranches were disappearing. Founded in 1898 by Dallas banker and rancher Colonel Christopher Columbus Slaughter, the Lazy S grew to comprise nearly 250,000 acres of the western High Plains in Cochran and Hockley counties, much of which lay in a single contiguous pasture of more than 180,000 acres.

Even with careful investment and management, C. C. Slaughter faced many challenges putting together an extensive ranch amid the development of the farmers’ frontier on the high plains. Within a decade, he crafted the Lazy S to become a showplace for well-bred cattle, effective range management, and efficient utilization of limited water resources. He created a working ranch that would serve as a long-lasting legacy for his wife and nine children, to remain “undivided and indivisible.” But shortly after his death in 1919, the family drained its resources, drove it into debt, then divided the land ten ways. In the 1930s, good fortune returned to some of the Slaughter heirs with the discovery of oil on the family lands.

Though the Lazy S Ranch was soon forgotten, the breakup of the ranch spurred a new era for the western Llano Estacado and led to the establishment of a county, growth of four new towns, and a railroad across the heart of the ranch, fostered for the most part by the land development projects of Slaughter’s descendants. Here,  David J. Murrah covers the entire, fascinating history in The Rise and Fall of the Lazy S Ranch.

DAVID J. MURRAH is well known as a historian of West Texas. A native of Gruver, located in the Texas Panhandle, Murrah has authored or edited six other books, including C.C. Slaughter: Rancher, Banker, Baptist and Lubbock and the South Plains: An Illustrated History. He currently serves as senior historian for Southwest Museum Services in Houston and makes his home on the Texas coast in Rockport.

“Historian David J. Murrah has now treated us with a highly readable and thoroughly researched history of the iconic Lazy S Ranch of the Texas Panhandle. His thorough understanding of the land, the economics of cattle raising with all its inherent problems, fence cutters, the droughts and winter storms – all become obvious on every page. Murrah has meticulously researched the available records of ranching relevant to the turn of the 19th-20th centuries and presents his findings in an entertaining manner. This work is not only important to the modern cattleman but to the lay reader as well. Colonel C.C. Slaughter may not yet be as famous as Richard King but this history of the Lazy S Ranch will stand alongside that of Tom Lea as a solid memorial.”—Chuck Parsons, author of John B. Armstrong: Texas Ranger and Pioneer Rancher and "Pidge" Texas Ranger
“The Rise and Fall of the Lazy S Ranch validates David Murrah’s reputation as the preeminent ranching scholar of his time. The marvelous narrative depicts how untimely deaths, “mismanagement, economic pressure, and family disunity,” tore asunder the “indivisible ranching empire” that cattle baron Christopher Columbus Slaughter methodically created as an insurance policy for his family.  Reminiscent of a Greek tragedy or Hollywood movie, the story encompasses every historic transformation on Texas’ “last frontier.” An epic tale of a legendary family’s generational struggle to manage and capitalize upon its inheritance, the book is a must read from the Paup ranching heritage series at Texas A&M Press.”—Monte L. Monroe, Texas State Historian and Southwest Collection Archivist, Texas Tech University
“Coming full circle, David Murrah completes the story of C.C. Slaughter by providing a thoroughly researched and entertaining narrative of his Lazy S Ranch. Adding immeasurably to the history of Texas ranching, settlement, and oil, Murrah’s expertise and familiarity with west Texas ranching history is evident throughout this captivating narrative.—Deborah M. Liles, Co-editor of Texas Women and Ranching: On the Range, at the Rodeo, and in their Communities 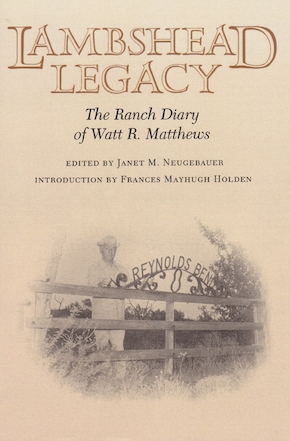