Between 1913 and 1920, the National Woman’s Party (NWP) waged a campaign to write women’s voting rights into the U.S. Constitution. Unlike the more moderate campaign strategies adopted by other woman suffrage organizations of the Progressive Era, the NWP remained committed to militant agitation—that is, holding political party leaders responsible for social change and doing so through nontraditional means of protest. Some of these militant strategies included heckling President Wilson, protesting silently outside the White House gates, and publicly burning his speeches in “Watch Fires.”

Such militancy resulted in institutional acts of social control including censorship, arrests, beatings, and force-feedings. And yet, by the end of the woman suffrage movement, the NWP had earned the endorsements of every major political party, as well as of prominent politicians (including Wilson), and had found its name splashed across the front pages of the New York Times, the Washington Post, and the Chicago Tribune. One Times article even referred to the NWP as the “suffrage leaders.” Exploring the ways in which the militant NWP negotiated institutional opposition and secured such a prominent position in national politics drives the analysis offered in this manuscript.

In light of the NWP’s militant identity and its demonstrated political viability, Belinda A. Stillion Southard treats the party’s campaign for woman suffrage as an example of how a relatively powerless group of women constituted themselves as “national citizens” through rhetoric. To this end, she uses volumes of NWP discourse, including correspondence, photographs, protests, and publications, to situate the NWP in the historical and ideological forces of the period, particularly as they are inflected by meanings of nationalism, citizenship, and social activism. In addition to this project’s historical focus, this study features the critical concept of political mimesis to help explain the ways in which the NWP mimicked political rhetorics and rituals to simultaneously agitate and accommodate members of the political elite.

Taking root in Aristotle’s notion of mimesis as the process of representation and drawing upon more postmodern theories that link mimesis to identity-formation, this study demonstrates that the NWP’s mimetic strategies took multiple forms, including parody and appropriation. Through the rhetoric of political mimesis, the NWP militantly inserted itself into U.S. politics while it also earned the political legitimacy needed to assert women’s citizenship rights. Ultimately, the strength of political mimesis as a strategy of social change was demonstrated by the ways in which the NWP’s rhetoric circulated within national and international political discourse and solicited a response from political leaders, the U.S. news media, and NWP supporters.

Belinda A. Stillion Southard is an assistant professor of communication at Indiana University-Purdue University, Fort Wayne. The author of several articles on topics related to the rhetoric of woman suffrage, she holds a PhD from the University of Maryland. 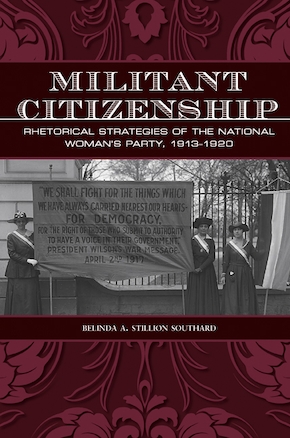