No published work examines General Henry H. “Hap” Arnold’s role in depth during the Pacific War of 1944-1945, in the context of planning for the destruction of Japan. In this new study, Herman S. Wolk, retired Senior Historian of the U.S. Air Force, examines the thinking of Hap Arnold, Commanding General, Army Air Forces (AAF), during World War II. Specifically, Wolk concentrates on Arnold’s leadership in crafting the weapons, organization, and command of the strategic bombing offensive against Japan, which culminated in Japan’s capitulation in the summer of 1945, ending the Pacific War.

The narrative is, in a real sense, a sustained controversy over strategy, organization, and command in the war against Japan. The B-29 long-range bombing campaign against the Japanese home islands dictated unprecedented organization and command; hence, Arnold established the Twentieth Air Force, commanded by himself from Washington and reporting directly to the Joint Chiefs of Staff. This new type of bombing offensive–distinct in command, organization, range, and weapons from the European experience–also called for exemplary operational combat leadership in the field. Here Arnold excelled in his command of the AAF, relieving a long-time colleague (Hansell) in favor of a hard-nosed operator (LeMay). This crucial move was a turning point in the Pacific war.

In the spring and summer of 1945, Arnold was a driven leader, almost willing the B-29 campaign and the air and sea blockade to collapse Japan before the scheduled massive invasion of Kyushu on November 1st. It was a tense race against the invasion clock and the conviction of General George C. Marshall, Army Chief of Staff, that an invasion was absolutely necessary. Although the Soviet declaration of war on Japan was a factor in the Japanese surrender, it was the atomic bomb that politically shocked the Japanese to capitulation. Arnold, the architect of the bombing offensive, emphasized that Japan was already defeated in the summer of 1945 by the bombing and blockade and that it was not militarily necessary to drop the atomic bomb.

Wolk brings out important rationales and connections in doctrine, organization, and command not previously published. He also mines sources not previously exploited, including the author’s interviews with General LeMay, Hansell, and Eaker; Arnold’s wartime correspondence; documentation from the Franklin D. Roosevelt Library; and postwar interrogations of Japanese officials and civilians. Cataclysm will prove an important addition to the history of the Pacific War, airpower, and the debate over the use of the atomic bomb against Japan.

HERMAN S. WOLK retired as Senior Historian, U.S. Air Force. After receiving B.A. and M.A. degrees from the American International College, Springfield, Mass., he studied at the Far Eastern and Russian Institute, University of Washington, 1957-1959. He was historian at Headquarters, Strategic Air Command, 1959-1966. He served in the Office of Air Force History in Washington, D.C., from 1966 to 2005. A fellow of the Inter-University Seminar on Armed Forces and Society, he was awarded the Maj. Gen. I. B. Holley Award for significant contribution to the research, interpretation, and documentation of Air Force history. He was the author of Strategic Bombing: The American Experience; Planning and Organizing the Postwar Air Force, 1943-1947; The Struggle for Air Force Independence, 1943-1947; Fulcrum of Power: Essays on the Air Force and National Security; and Reflections on Air Force Independence.

“Cataclysm is a fine book. It deals with a subject that is central to the conduct of the always controversial last act of the Pacific War and indirectly with the creation of the USAAF in structure and doctrine. It will be well received and, more importantly, of great use to a new generation of scholars examining the Pacific War.”—Eric M. Bergerud, author of Fire in the Sky: The Air War in the South Pacific and Touched with Fire: The Land War in the South Pacific

“Wolk's book includes more detail and depth on Pacific air campaign grand strategy than any other available. His work is a solid contribution to the scholarship already available on General Arnold and the strategic air war in the Pacific.”—Dik A. Daso, author of Hap Arnold and the Evolution of American Airpower and U.S. Air Force: A Complete History

“Although there have been books about the Pacific War, to include the B-29 campaign, and there have been books about Hap Arnold, there has not yet been a work that ties those two together and looks closely at Arnold as a combat commander. Herman Wolk is a true pro, and his unique book will appeal to military historians of all stripes.”—Phillip S. Meilinger, author of Hoyt S. Vandenberg and Hubert R. Harmon

"In Cataclysm, as in all his other work, Wolk combines detailed research, mastery of the secondary literature, and trenchant analysis. Wolk makes several original contributions to the literature on the development and employment of U.S. military aviation before and during World War II. . . . By delving deeply in his sources and asking original questions, Wolk has produced a volume with which students of the U.S. Air Force and World War II must reckon."--Military History of the West

"The author does an outstanding job of identifying the critical issues and events, helping us understand combat leadership. Hap Arnold did not hesitate to replace a long-time colleague, Haywood Hansell, with the hard-charging Curtis LeMay. This became a turning point in the bombing campaign and in the war. That the author could draw upon earlier interviews he conducted with Generals LeMay, Hansell, and Ira Eaker enhances this study."--Journal of America's Military Past

"The work is based on extensive research in major document collections, important interviews, and a lifetime of work in the field. . . . Cataclysm is an essential volume for the study of strategy in the Pacific war or of the development of American air power."--Journal of Military History

"Cataclysm is an objective, persuasive, articulate account of Hap Arnold and the strategic bombing effort against Japan in 1944 and 1945. It is a must read for any serious student of World War II, air power, and senior-level military command."--Military Review 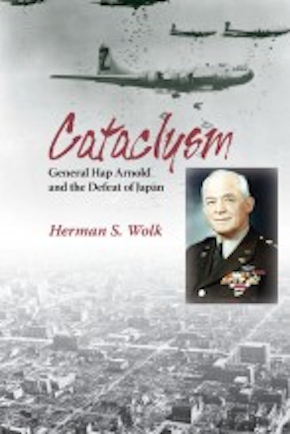